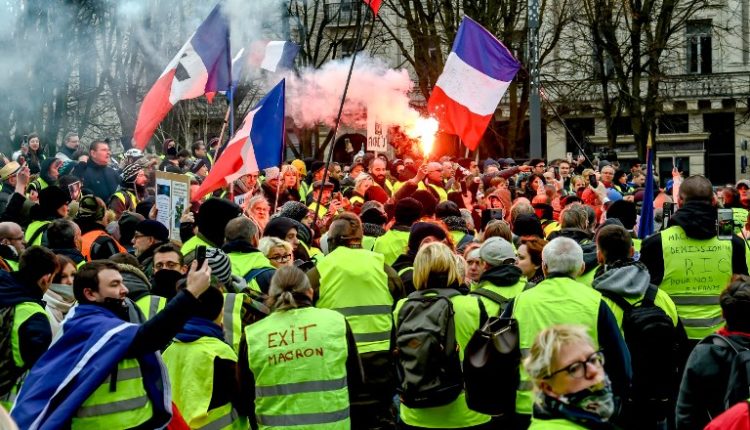 Yellow Vests Again on Protest in the Streets of France

Yellow Vests Again on Protest in the Streets of France. Despite the new promises from President Emmanuel Macron, who promised, among other things, a tax reduction, an estimated 5,500 ‘yellow vests’ took to the streets again on Saturday.

According to the French media, there were two protest marches in Paris. Members of the large CGT trade union also joined. The news channel BFMTV estimated the turnout in Strasbourg to be around 2000 people.

Strasbourg was selected for the European elections next month. Protesters from Germany, Belgium, Italy and Luxembourg also participated there.

The tension increased during the afternoon. Protesters threw stones at the police. He responded with the use of tear gas. Then it quickly became quiet again.

The Lower Rhine chief station had banned protest meetings in the centre and the vicinity of European institutions for fear of disturbances of public order due to disturbances. According to the newspaper Le Parisien, the local tradespeople in Strasbourg had called for security measures.

In Paris, 2600 activists stood still in front of media company buildings. They demanded “fair treatment by the press.”

The route from the ‘march to the media’ led through the editors of Radio France, TF1 / LCI, CNews, France Télévisions, BFMTV and ended with the CSA, the high commission for audiovisual media.

The yellow vests have been demonstrating since November against the reform policy of Macron and the government. Last week the authorities in France had 27,900 demonstrators, 9,000 of them in the capital.

Why British People Love to Buy Chesterfield Sofas and Dining?