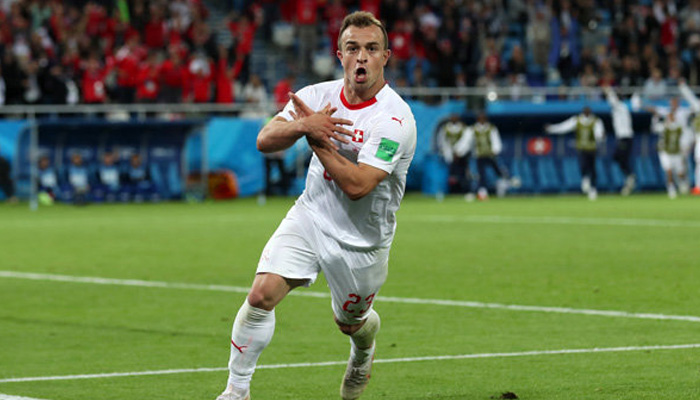 Switzerland has won the excellent World Cup game with Serbia at the previous moment. Xherdan Shaqiri gave the Swiss victory in the final minute of the regular game time: 2-1. The striker of Stoke City was sent in from the home half and finished it in a controlled way, reported Right News.

Switzerland, which had previously held Brazil at 1-1, was four points thanks to the late victory. The team of national coach Vladimir Petkovic shares the first place with the Brazilians. Serbia, which gave up an early lead in Kaliningrad, remained at three points. The Swiss take on Wednesday in the last group match against the still scoreless and already eliminated Costa Rica, Serbia hits Brazil.

Led by Dusan Tadic, who probably returns to the premier division at Ajax after the World Cup, Serbia dominated the first half. The Eastern Europeans took the lead in the fifth minute via Aleksandar Mitrovic. The striker headed an excellent cross by Tadic past keeper Yann Sommer (1-0).

Switzerland battled back into the match in the second half. After a knocked off shot by Shaqiri, Granit Xhaka hit the 1-1 past goalkeeper Vladimir Stojkovic. Xhaka was fortunate that the Serbian defender Branislav Ivanovic pulled his head, so the ball sailed over him in the goal. The Swiss were also happy to praise when the German referee Felix Brych did not point to the spot after Mitrovic was pulled out by two defenders.

In the final phase, the best chances were for the Swiss. Thanks to Shaqiri, who had previously hit the outside of the post, they took the win in the last minute. Citi News writes, Shaqiri celebrated his goal exuberantly. He took off his shirt and provoked the Serbian fans, who had always called him out because of his Kosovar Albanian roots.

Vincent Lambrecht is out of British Competition in YH-Test Bonheiden